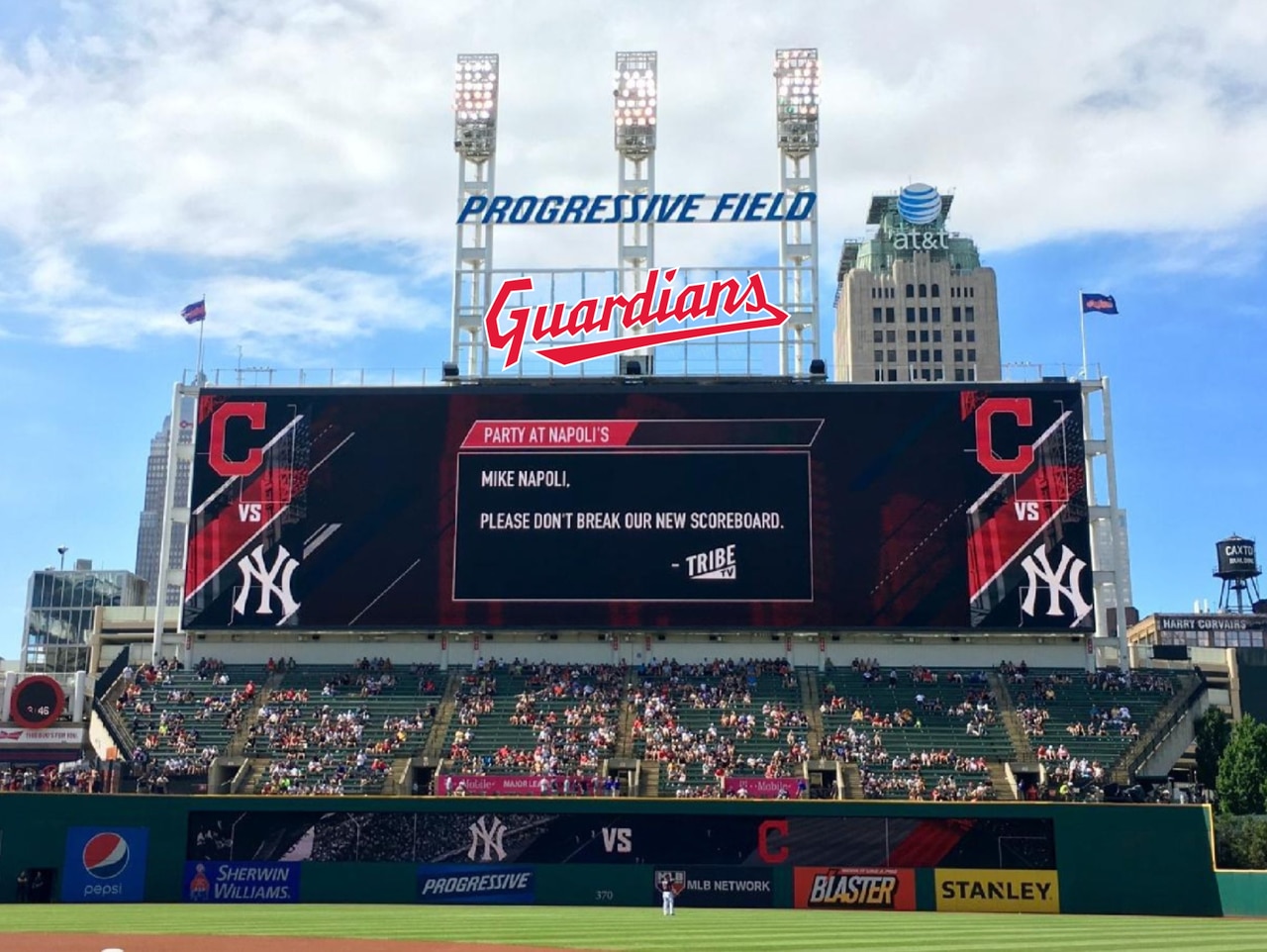 CLEVELAND, Ohio – I wrote a column about the tribe’s last home game as the Cleveland Indians.

It was a nostalgic story, memories of going to games with my dad in the 1960s. For me, there was some sadness about the Guardians’ name change. But the big point is that the name on the front of the jersey remains the same – Cleveland.

It brought up a lot of emails. The majority liked the story and admitted some grief about the name change. Some were still outraged that the tribe would become the Guardians in 2022 and were angry that I didn’t want to continue waging this culture war.

A significant minority welcome the name change. I give them the floor with other points of view. It’s gone, once the last discussion (at least on my part) on this subject, with readers proposing a different tone. I am only using parts of these emails as most were long, some with more words than this column.

THIS FROM REID: FROM ONE WHITE MAN TO ANOTHER

“I understand that the name change was difficult for some people, including you – but I was disappointed with the columns you wrote about the move. You have an important voice and an opportunity to help people look to the future; instead, most of what you’ve written is dark and mournful.

“You say you don’t want a cultural debate, but something I learned as a white man is that we can’t choose neutrality. To be silent, to mourn the loss of familiar and comfortable symbols that make us feel a sense of belonging but remind others that they are subjugated in our society – it is complicity, not neutrality.

” I am 33 years old ; I was born and raised in Cleveland. I fell in love with baseball in the 90s, great teams that I will remember all my life. Now, I like to encourage a wise and well-managed team …

“That said, as I learn more about the experience of non-white, non-male members of our society, it has become more difficult for me to celebrate the fandom of my Indians. I’m ashamed of the name and I feel a deep sense of guilt wearing team gear, not because of pressure from others, but because I know in my heart that it’s wrong.

“Anyway, I’m thrilled with the change. I can’t wait to cheer on the Guardians and am so grateful that the franchise made this decision before my children were born – so I can proudly buy them t-shirts and hats, no doubt on the message of the name or logo that these items bear.

DEAR REID: I first pushed to change the Chief Wahoo logo in a 1997 column and in my book Our Tribe. Most of my coverage of the name change (about a dozen stories) has been about how and why it happened.

THIS FROM CHRIS: FORGET NOSTALGIA

“I’m 56 and grew up with Indians and didn’t find Monday a ‘sad and nostalgic’ day at all. The Cleveland Baseball Club did the right thing by changing their name. This debate has been going on for at least half of my life.

“Anyone who claims to be shocked and surprised by this just hasn’t paid attention to it. It is high time to move on. Nostalgia is not productive. It keeps our minds rooted in the past and distorts our perceptions. If Cleveland presents a winning team next year and can advance to the playoffs, the vast majority of fans aren’t going to sit around complaining about the name change. “

DEAR CHRIS: I agree, winning brings people together. But it is not wise to dismiss all nostalgia. What about family history and memories?

THIS FROM BRIAN: YOU HAVE CELLAR

“I don’t think your father would give in on the Indians’ name. I am 69 years old. I hope I can wean myself off from the Indians. I would have respected you more if you hadn’t given in.

DEAR BRIAN: My dad probably wouldn’t have liked it, but the main thing for him would be to have a team in Cleveland.

FROM ANOTHER CHRIS: SO MANY MEMORIES

“Thank you for the article on the last Indian home game. Right on point. I was actually between the two generations, I grew up with Rick Manning, Duane Kuiper and Buddy Bell, but loved it when Jacobs Field was built. So many incredible memories over the past 27 years. I’m sure many more to come!

DEAR CHRIS: I covered the tribe for the PD from 1980 to 1984 (before Paul Hoynes). These weren’t exactly the glory years. Ditto for the Tribe teams of my youth in the 1960s. But there is still something special about these memories. Not all nostalgia is bad. Still remember getting my first autograph from Mudcat Grant.

“Your story hits me hard, when you talk about the relationship with your father and how Indians hold a prominent place in your memories of him. As a son and a father, I feel it very deeply.

“Are the name and logo of the company you and him associated really at the heart of these memories? It’s not for me to say of course, but I like to think they weren’t, for you, me or whoever it was.

“Your article mentions the idea that anyone who is sad to lose the Indian name and likeness suffers from immediately feeling labeled as racist. There is no doubt that some people do that kind of labeling, but I see a lot of defensiveness in this position.

“I think being invited or challenged to think about why any of us thinks that longing for a name and likeness is comparable to the marginalization of entire subsets of our fellow citizens is worth looking into. “

BY CAROLYN: WE REMEMBER

“My childhood hero being Daddy Wags (Leon Wagner). My sister was Rocky (Colavito). My parents are deceased but my Indian story is also a family story and I think you expressed it in your article.

“My father was a pastor in the Youngstown area and the congregation knew that if the sermon was short we had tickets to the game that day! Five children in the back of a station wagon, changing on Sundays in the car, eating sandwiches packed in a cooler for the ride.

DEAR CAROLYNE: These are the players I grew up with.

FROM JIM: WHAT REALLY MATTERS

“I went to my first Indian game in 1955. While I have never found the name ‘Indians’ offensive, I also admit that I am a ‘White over 70’. Who am I to really understand how a Native American reacts to this name? So I accepted and understood the decision to change my name.

“I don’t like the name ‘Guardians’ and intend to purchase Guardian gear when it becomes available. Most importantly, the team stays in Cleveland, whatever nickname comes after. Nonetheless, the end of an era does trigger some emotion, especially on occasions like Monday watching what I know will be the last game the team will play for the Indians at home.

FROM LUKE: ON MORE REVIEW

“I have deliberately avoided the Indians since they changed my name. I went to many games with my family, friends, colleagues, etc. Now, I don’t even open an organization email or watch the highlights anymore.

“I have two young children and I asked them what they thought about the name change, as well as a quick discussion about how it’s okay to disagree with people without being rude. They cared less about the name change. They just wanted to know when we could go to another game together.

“Your article reinforced the need to continue to share this link around sport with them. And, I guess I’m more open to sharing a Guardian experience with my kids than before reading your article.

Hey Terry: Will the Browns lose to Minnesota? Is Big Ben over?

A sad and nostalgic day at the stadium

Tribe Scribbles: Attendance, when will they become the Guardians?

A fun day for the Browns, a real team victory

Browns pre-game doodles: How about more of the Browns defense?

Talking Tribe: a look at some upcoming roster decisions after the season

Minor league baseball was back. How did it go with the fans? Akron gives a hint

Terry’s podcast, lots of stuff on Browns and Tribe leads

Large crowd. It is a victory. Problems for the Browns’ defense.

Browns pre-game doodles: A cool get-together with the wives.