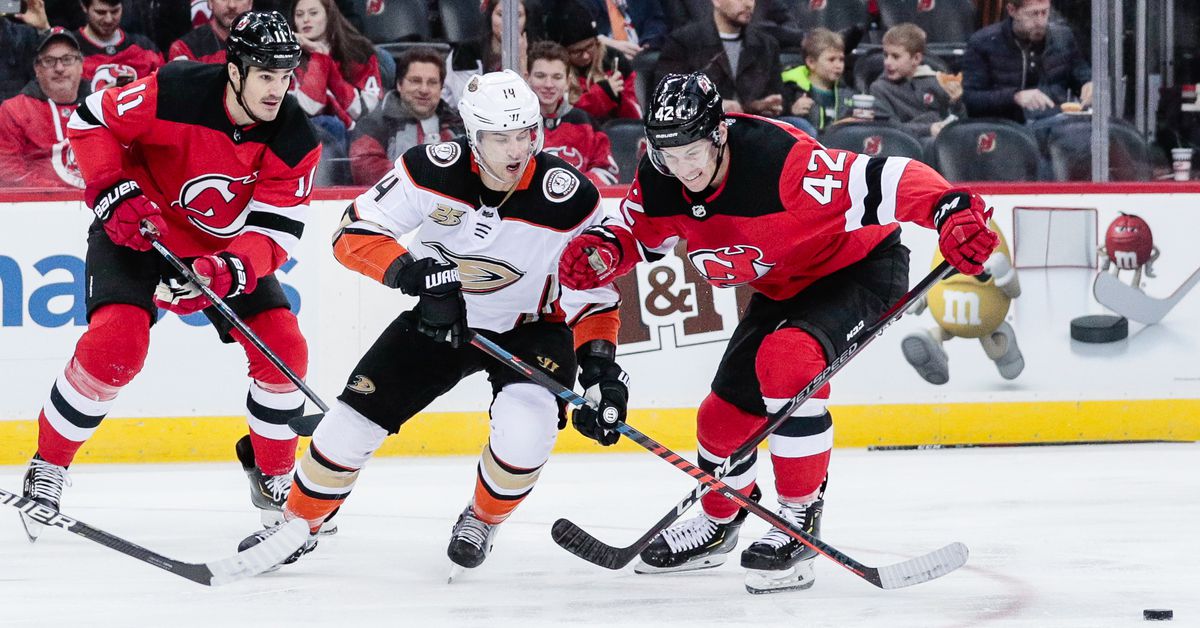 The Devils found themselves as goaltenders against the Winnipeg Jets in a 2-1 home loss Thursday night. I noted in my recap of this game that the Devils did a lot of things right, but the lack of finishing really stood out as Eric Comrie played well for the Jets. I really don’t have anything else to add other than that, so go back and read my very good and correct takes of this game if you missed it.

The Devils last played the Ducks Nov. 2 in Southern California … a 4-0 shutout loss where the Devils didn’t do much good. Jenna had the recap of this game and noted how special teams put the Devils behind the eighth pitch, as they allowed the Ducks three power-play goals. Luckily for the Devils, the penalty kill has improved significantly since then, although I would still avoid taking unnecessary penalties like two (2) overman calls. The other goal Anaheim scored was on a 2 on 1 the other way where Ty Smith was stuck in no man’s land and Troy Terry beat Jonathan Bernier…..a situation we’ve seen countless times this year unfortunately with the Devils getting caught in an odd man rush.

Dougie Hamilton was injured during the game and the ESPN Plus broadcast duo of Leah Hextall and Kevin Weekes didn’t seem to notice he missed the entire second period until there were 2 minutes left. Lindy Ruff tried to blame jet lag for the loss in her postgame press conference, even though the Devils came out strong in the first half of the game, which would seemingly contradict that assessment. All in all though, it was just a night to forget for the Devils.

At last, PK Subban fined $15,000 for tripping Trevor Zegras this game, and while he avoided suspension for this particular game, it doesn’t seem like the kind of thing the Ducks will forget so easily. This could be a subplot to watch if the Ducks decide they want to try and get their pound of flesh with Subban.

The Devils picked up players in practice Friday that we haven’t seen in a while.

Other players still come on the ice. #NJDevils

Nico Hischier and Miles Wood have just walked on the ice to #NJDevils practice.

As Amanda Stein noted in a follow-up tweet, all four players wore non-contact shirts during practice on Friday. If I had to guess, Nico Hischier is probably the closest to playing since playing recently, but I’d be honestly surprised if any of those players fit in tonight. Still, it’s nice to see that Miles Wood (who has missed the entire season), Tyce Thompson (missing since Nov. 11) and Janne Kuokkanen (missing since Feb. 7) are on the mend and at least in good shape. direction.

I would expect the Devils to have a similar lineup to what they ran against the Jets on Thursday, which you can see below.

Jack Hughes (18 G, 26 A in 38 GP) missed the game earlier this season against the Ducks as he was still out with the shoulder injury he suffered against the Kraken in the second game of the season . I’ll be curious to see how he looks against a team he hasn’t faced since his rookie season in which he struggled. Hughes is a much different player now than he was then. Aside from being a scoring machine, he plays with all sorts of confidence and arrogance, creates something offensive almost every time he’s on the ice and is clearly the attacker. the most dangerous of the Devils at the moment. I can’t wait to see what he does next.

Keep riding with Daws or go back to Gillies?

It’s safe to say that Nico Daws took control of the Devils net and capitalized on his opportunity as the Devils starting goaltender. He made six straight starts heading into today’s game and played well, posting a .910 save percentage during that streak. Simply put, Daws has given the Devils a chance to win every time he plays, which is a far cry from what we’ve seen at net for most of this season.

My concern is that it’s a bit “too much, too soon” with Daws and because Daws is clearly the best option the Devils have right now, he might be overworked. I also don’t fully trust the Devils’ management not to continue directing him there for that very reason. I’m concerned that management is looking for short-term gains at the expense of long-term, which at this point is whether Daws should be considered a long-term option for the net future.

In fairness to the Devils brass, the Devils haven’t played a single game in a row this week. There are “only” six consecutive starts and 7 of the last 8. The Devils have a few days off before a back-to-back game Tuesday and Wednesday next week where I would expect the goaltenders to split starts. There are enough back-to-back streaks left in the schedule (six in total, most of them in the next two weeks) where there should be opportunities to keep Daws fresh and not overdo it.

It’s not the end of the world if the Devils start Daws against the Ducks, but it’s something I’ll be watching closely as the Devils play the ropes. I won’t be exactly thrilled if Daws ends up starting. say, 24 of the last 32 games this season, because that’s a bit much for a 21-year-old rookie who shouldn’t even be in the NHL right now.

What do the Ducks bring to the table?

The Ducks have slipped a bit, going 10-14-2 since Jan. 1 and dropping to sixth in the Pacific Division. Trade rumors have also swirled around the team with Rickard Rakell, Hampus Lindholm and Josh Manson all set to reach UFA this summer and all reportedly available with the trade deadline in nine days.

Why did the Ducks struggle? They can’t stop the other team from putting the puck in the back of the net. The Ducks allowed 3.73 goals per game in that aforementioned streak. By comparison, the Devils (with all their goalie issues) have allowed 3.56 goals per game this season. John Gibson really struggled with an .893 save percentage during that span, and backup goaltender Anthony Stolarz (native of Edison, NJ) didn’t fare much better with an .897 save percentage. It has to be a game where the Devils attack, attack, attack and get a lot of rubber on the net. And in the case of guys like Pavel Zacha, Tomas Tatar, Andreas Johnsson and pretty much anyone else in the bottom six who doesn’t carry their weight, this has got to be a game they finish. Not everything can be Jack Hughes and Jesper Bratt wearing this team.

Troy Terry and Trevor Zegras continue to lead the way offensively for the Ducks. Terry, in particular, was a thorn in the side of the Devils the last time those teams met with two goals and with Trevor Zegras and Jack Hughes being as close as they are, I’d rather the Devils weren’t on the side of receiving a flagship goal from Zegras with his buddy in the building. If I was Alain Nasreddine or Lindy Ruff, I would try to focus on getting those two guys away and living with the results if the Ryan Getzlafs or Sam Steels of the world beat you instead.

Finally, Anaheim is still 7th in the league on the power play, converting at a 24.6% clip. The Devils’ penalty kill has been much better since the last time these teams met (currently 10th in the league at 81.3%), but that doesn’t mean I want to see the Devils take a bunch of reckless penalties. . Be smart, play a disciplined game and only take penalties that are absolutely necessary. Having multiple penalties from too many men against the Ducks was not acceptable in November and it is not acceptable now.

What do you think of tonight’s game? Can the Devils end the homestand with a win? Who would you start in the net, Daws or Gillies? Are you excited about the Devils potentially bringing some players back into the roster in the near future? What are the keys to the game for you? Feel free to leave a comment below and thanks for reading!