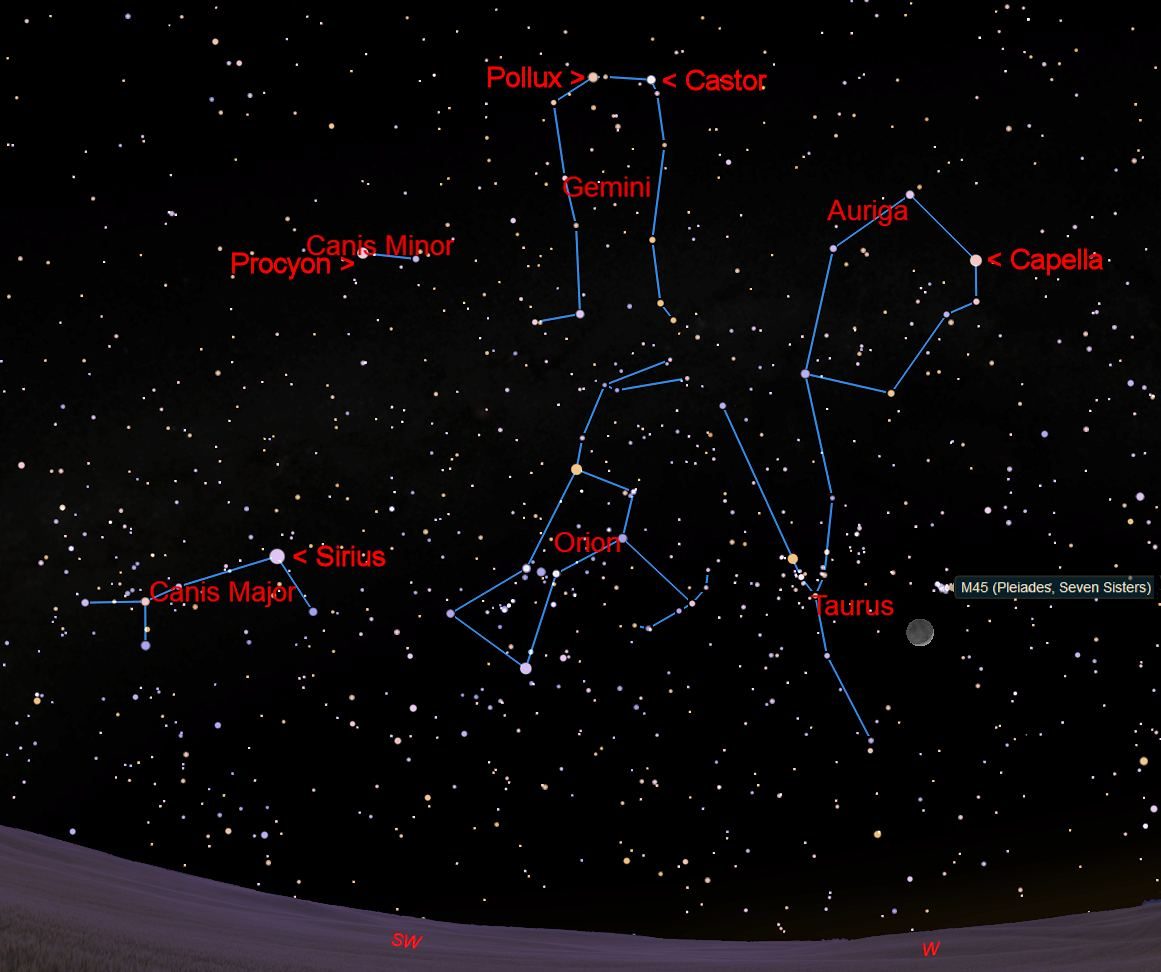 As spring weather finally begins to set in, Orion, his dogs Canis Major and Minor, and other winter star patterns begin to set in the evening sky. We only have a few weeks left to see these constellations.

The movement of the Earth in its orbit around the sun not only has a role in changing the seasons, but it causes the night side of the planet to face different parts of the sky. The night side of Earth is now beginning to move away from the stars that were high in the evening sky in mid-winter.

To see them before they disappear, face the southwest sky between 8:30 p.m. and 9 p.m. First look for the three stars in Orion’s belt. They are now almost parallel to the horizon. 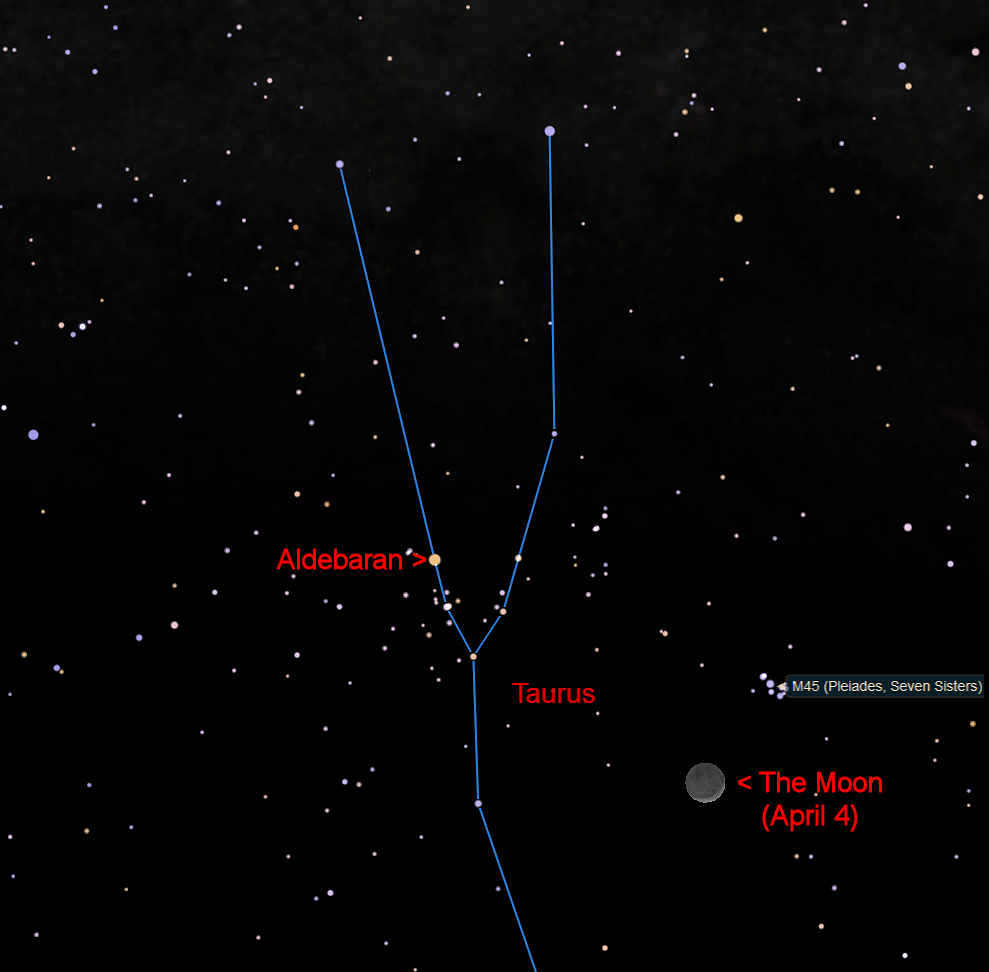 Weather permitting, a thin crescent moon will be visible near the Pleaides star cluster in the western sky on April 4. Photo courtesy of starrynight.com

Follow the belt to the right to find Taurus, the bull. The charming star cluster of the Pleiades is also present in the western sky. Use a pair of binoculars to get a glimpse of his collection of stars before they get too low to see. Tonight, April 4, look for a slender crescent moon near the Pleiades.

Next, travel from Orion’s Belt to the left for a view of Canis Major and the brightest star, Sirius. Above Sirius is another bright star named Procyon in Canis Minor. Look for the Gemini twins standing above Orion.

Near Gemini is Auriga. Its pentagonal shape sits above Taurus with the yellowish star Capella illuminating the western sky. 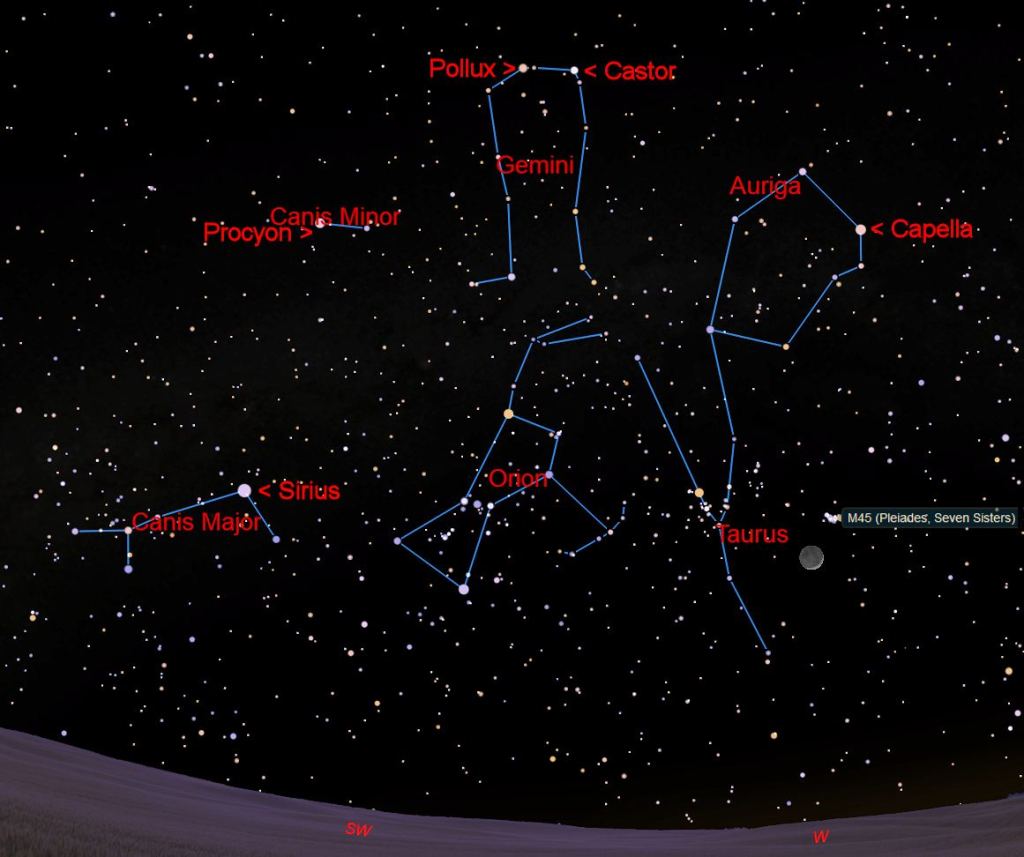 Look to the southwest and west skies for these winter constellations. Orion, Taurus, Canis Major, Canis Minor, Gemini and Auriga will remain visible for a few more weeks. Check them out before they get too low to view. Photo courtesy of starrynight.com

All these stars are slowly sinking out of sight. However, the twin stars Castor and Pollux, plus Capella, will remain visible after sunset for several weeks, eventually setting in early June. Say goodbye to those star patterns until they return at the end of the year.

Kevin D. Conod is an astronomer and president of the North Jersey Astronomical Group.