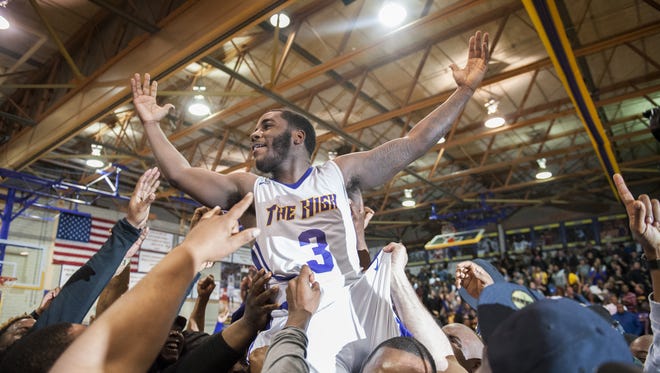 There are a lot of great rivalries in South Jersey and our sports department has seen a lot of them sideways.

What’s the best that they’ve been a part of at work?

This is the question of this week in the round table of journalists.

There is no doubt that Vineland-Millville is the best rivalry in the region. Think of it as the South Jersey feud between the Hatfields and the McCoys. Whatever the sport, tensions are at their highest when these two border towns clash. To put it simply, the two parties don’t like each other. Some coaches won’t even mention the name of the other city when discussing it.

And it doesn’t get bigger than in football.

Legend has it that fans on both sides bet a weekly paycheck to the 1940s and 1950s on the big game between Vineland and Millville.

The rivalry is one of the longest in the country, starting in 1893, and will reach a special stage later this fall when they meet for the 150th time on Thanksgiving.

However, two of the best rivalries I have covered have come from the individual side.

The fight produced many epic battles, but few can match the wars fought by Joe Alexander of Delsea and Mark Manchio of Sterling as well as Mark Saul of Millville and Karl Haywood of Schalick.

The Alexander-Manchio rivalry included two encounters in the Region 8 final and two more times in the national final.

In 1998, a young man at the time, Manchio, beat the then defending champion Alexander with a thrilling overtime pin in the Region 8 final, producing a decibel level in the Absegami gym that I didn’t. had never heard before or since.

Alexander retaliated the following week with a 4-2 decision in the 112-pound state final.

The following year, Manchio won a 4-3 decision in the regional title fight and a 6-5 victory in the 119-pound state final.

In 1995, Saul and Haywood met three times, all resulting in one-point decisions. Saul won the first bout of the District Finals before Haywood returned the favor a week later in the Regional Finals. The following week, Saul claimed a one-point victory in the state semifinals en route to his first of two state titles.

The easy answer would be Vineland-Millville. There is no rivalry in South Jersey that I have covered more. I’ve seen the Fighting Clan and the Thunderbolts face off on every playing surface: the grill, the hardwood, the pool, the track, the tennis court, the golf course, and the court.

I watched a lot of great games – most notably the incredible Thanksgiving 2014 game in which Millville won 44-40.

However, the most memorable rivalry I have experienced was between the boys’ basketball programs at Haddonfield and Camden.

In 2017, I missed John Evans hitting a runner with 6.2 seconds left in overtime as the Panthers won 42-40 in the South Jersey Group 2 final.

But I caught the playoff game the following year as Haddonfield’s Mike DePersia hit a takedown with two seconds left in overtime in a 54-53 triumph in the section semifinals.

Dan Fleming of Haddonfield buried a 3-point draw with eight seconds left in regulation to force overtime for the third year in a row, and the Haddons went on to win the rubber game with a 69-67 triumph in the South final 2.

“It’s one of my favorite games I’ve ever played,” Fleming said moments after a storm put the exclamation mark on Haddonfield’s second consecutive section title. “It was just electric.”

Some rivalries come and go, losing intensity as the fortunes of the teams involved rise and fall. For me, a rivalry never loses its fire, its competitiveness. Well, technically two.

From the days when they were both in the Burlington County League a quarter of a century ago until today, a year after Moorestown joined Shawnee at the Olympic Conference, there is no had a better, more impactful and more competitive rivalry than when the Quakers and Renegades face off in field hockey or women’s lacrosse.

In field hockey, Moorestown is second behind Eastern for crown titles. Shawnee is not far behind. In fact, in a stretch between 1987 and 1992, each school had a series of overlapping five-year crown titles.

In lacrosse, Moorestown and Shawnee are 1-2 in the state championships after meeting in the state ultimate championship game nine times. Not to mention the two decades of playoff games, sometimes in a sectional final as lacrosse has grown from less than two dozen South Jersey teams to nearly 50 today.

Schools have met, often in fact, in other sports over the years, but nothing compares to any time blacks and blues meet in kilt. Whether in the regular season or in the final of the Tournament of Champions, no game is more important to the players.

There are far too many amazing games to pick a favorite memory. Too much. What makes the rivalry the best, however, is the players over the years who would do anything to win. In many cases, despite attending different schools, players were often the best friends in the world.

I will remember best friends like Meridith Elwell and Danielle Vile, Courtney Legath and Jackie Yovankin, Marie McCool and Carloine Shinske. Countless other pairs, who were some of the best players the state has ever seen, best friends, and toughest competitors you would want to see from opposite sides of the field.

I’m going to be the guy who can’t decide this time around so I’m going to take the sneaky route and have a winner for both girls and boys.

Funny you hit me with this one a week after I mentioned Lyndsay Mouse, because the Northern Burlington and Rancocas Valley softball teams played a whole host of classics.

In 2002, the Greyhounds won the Group 2 State Championship, but they parted ways with the Red Devils, who won Game 1, 5-2, when their outfielder Natalie Benyon ended a rally. of Greyhounds in the seventh inning by throwing a runner home.

They met five times in 2003 and 2004, they both took trips to Florida early in the season and were paired there. Rancocas Valley scored 10 total points in those five games, but won them all, as the Greyhounds couldn’t solve Lisa Sweeney – although they ultimately did with Mouse’s home run in 2005 ( if a home run after 20 strikeouts can be called pitcher’s resolve, that is).

So just like the Red Devils caused a fault in the Northern State Championship season, the Greyhounds returned the favor.

RV won the second leg that year. I actually had a better seat for that one than Brian Wolverton, who started in the second set – when the referee dismissed his opinion on his visual acuity.

It was the only time I saw this happen in a high school softball game.

Between 2000 and 2013, either RV or Northern Burlington won all of the BCSL Liberty Division titles.

The Greyhounds won it with their freshman class ‘Magnificent Seven’ in 2017, but the Red Devils paddled them, 18-2, in their second regular-season meeting and beat them again in the final of the BCSL tournament.

That last game took place on June 9 – 10 days after the Red Devils’ last playoff game and 17 days after the Greyhounds were eliminated. The teams got together just to go out and fight one last time.

“We are opposed,” Wolverton once told me. “We wear blue, they wear red. We are the Americans. They are the Soviets.

On the boys ‘side – but not limited to boys’ sports – it’s Cinnaminson vs. Delran in anything. I’ve been most exposed to this one as a football and wrestling writer, and it has been the source of some of my favorite moments in this job.

There’s a whole column in there. Another, I mean – I’m pretty sure I’ve written one before.

Delran’s football team beat Cinnaminson, 3-1, in the 1997 opener. A Bears player told me after the game that his team “should have had five or six,” and Bears recalled the quote loudly on the way back to the bus after Cinnaminson won the second leg, 2-0.

It was right after that.

Then there was the time in 2004 when the soccer teams both won sectional titles – Delran in central Jersey, Cinnaminson in the south – and the state decided they should play the semi-final. at Bridgewater-Raritan.

Delran won that one in a shootout.

The Bears won another shootout in 2015 after a 1-1 draw at Cinnaminson. I came out in the middle of the field at half-time, just to pan the crowd with my camera. I have never seen such a buzz around a football game. I’ve never seen a crowd of footballers like this anywhere else.

There was the goal that should have counted but didn’t count – which effectively ended Cinnaminson’s 2019 season. And whoever did it – like Ryan Adams ended Delran’s recent domination of the series just a few weeks ago.

I can’t help but think that there is another one coming this year.

In 2010, I was at Peter Vermes Field, to pick up my daughters after football camp. I was talking to Mike Otto, then coach of the Bears, when it started to rain. They were big, fat, mostly cold, raindrops, but luckily I had seen it coming; I had a huge golf umbrella with me. I opened it and started to walk towards Otto.

“Get away from me with this thing,” he said.

He stood there, drenched, as we continued our conversation. He wouldn’t accept the comfort of a red and black umbrella.

Josh Friedman has produced award-winning sports coverage of South Jersey for the Courier Post, Daily Journal and Burlington County Times for more than a decade. If you have or know an interesting story to tell, contact us on Twitter at @ JFriedman57 or by email at [email protected] You can also contact him at 856-486-2431. Help support local journalism with a subscription.