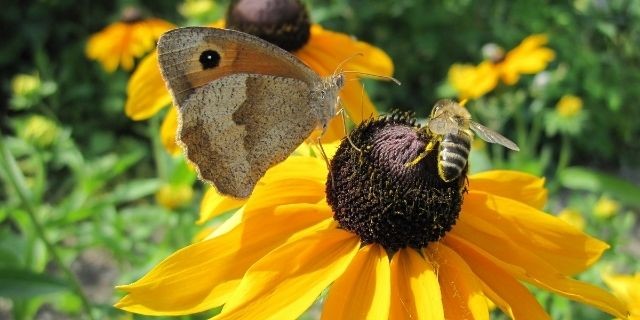 (Beyond pesticides, January 26, 2022) Officials in New Jersey and New York are taking action to protect their states’ declining pollinator populations by limiting outdoor uses of neonicotinoid (neonic) insecticides. At New York, the state’s Department of Environmental Conservation has announced that it will make these pesticides “restricted”, and only available to state-certified applicators. In New Jersey, A2070/S1016, sponsored by State Senator Bob Smith and Assemblyman Clinton Calabrese, was signed by Governor Phil Murphy last week after years of advocacy by national, state and local pollinator and environmental groups. . “The law builds on the latest science to ban the largest uses of neonics in the state,” said Lucas Roads, attorney for the Natural Resources Defense Council. “This is great news not just for neonic-poisoned pollinators, but for all farmers who depend on insect pollination and for all New Jerseyans who value thriving ecosystems.”

A2070/S1016 provides for a targeted phase-out of outdoor uses of bee-toxic neonicotinoids, chemicals implicated not only in pollinator decline, but also in the the collapse of entire ecosystems. Beginning 12 months after its passage, the bill requires state agencies to classify neonicotinoids as “restricted.” Under this designation, only certified pesticide applicators would be allowed to apply these products, eliminating consumer uses. Then, at the end of 2023, the bill prohibits all non-agricultural outdoor uses of neonicotinoids. Exemptions are limited to veterinary care, wood preservation, exterior applications within one foot of a building, and invasive species. The state commissioner of agriculture can also grant a time-limited waiver for use only if an applicator can prove that a “valid environmental emergency exists” and no other less harmful pesticide is available for use. the given urgency.

New Jersey and Maine now have the strongest pollinator protection laws in the country. While now, in addition to New York, Connecticut, Maryland, Vermont, and Massachusetts have generally taken consumer uses of neonics off the market, the NJ and ME bills represent another step forward by eliminating most outdoor non-agricultural uses. These changes will have major implications for pollinator and ecosystem health, reducing an even greater proportion of hazardous pesticide use. A report released by the NJ Department of Environmental Protection found that of 250 surface water samples collected, at least one neonicotinoid was detected in more than half of those tested. With even minute exposures to neonic products that can kill wild pollinators, any future use that can be eliminated is a net positive for wildlife.

Although progress in protecting pollinators in the United States has been slow compared to action taken in the European Union, which has banned all outdoor uses of neonicotinoids, including those in agriculture, the pesticides has focused considerable resources on stopping US policies. A 2020 report, “The Playbook for Poisoning the Earth,” published in Intercept by journalist Lee Fang details a massive campaign of public deception by the pesticide industry, aimed directly at stopping state and federal action protecting pollinators from these highly dangerous insecticides. In this playbook, the pesticide industry has tried to present itself not as an ancestor, but as the solution to the plight of pollinators. This approach has focused on spinning science around neonics, diverting attention to pre-existing problems in beekeeping, such as diseases and mites, which are actually exacerbated by the use of neonics, and using farmers, beekeepers, scientists and other industry-connected influencers to try to confuse lawmakers and the public about the real cause of pollinator decline.

As early as 2014, Beyond Pesticides claimed that this ongoing pollinator crisis was no longer a big mystery. But significant action has been diffuse, and only seven states to date have passed restrictions on the use of neonicotinoids. At the federal level, the US Environmental Protection Agency (EPA) simply required “managed pollinator protection plans” with no commitment from individual states (MP3). These plans essentially handed over to state pesticide lobby groups to figure out how to protect pollinators; not surprisingly, the use of pesticides was not a major component of most of these plans. In fact, in 2019 the agency was cited for its failure to provide basic oversight of these state MP3s, with the EPA’s Office of Inspector General noting that the agency had no way to to assess the impact of MP3s, that the agency focused too much on the treble. risks to pollinators and an insufficient amount on chronic impacts. The EPA’s inaction and failure to stand up to the pesticide industry means that pollinators and ecosystems continue to suffer across much of the United States.

State action is urgently needed to fill the gaps left by EPA inaction, and New Jersey and Maine represent a new high bar for neonicotinoid restrictions. But in the long run, it’s essential to stop all use of neonicotinoids in the United States and prevent the next round of pollinator-toxic chemicals from going mainstream. The Saving America’s Pollinators Act would accomplish this goal, bypassing the industry-influenced EPA and allowing a council of pollinator experts to make decisions about pesticide registration. Ask your elected representative in Congress to support pollinators by co-sponsoring the Saving America’s Pollinators Act (SAPA). If they are already Cosponsors, take this opportunity to thank them for their leadership on this critical issue.

All unattributed positions and opinions in this article are those of Beyond Pesticides.