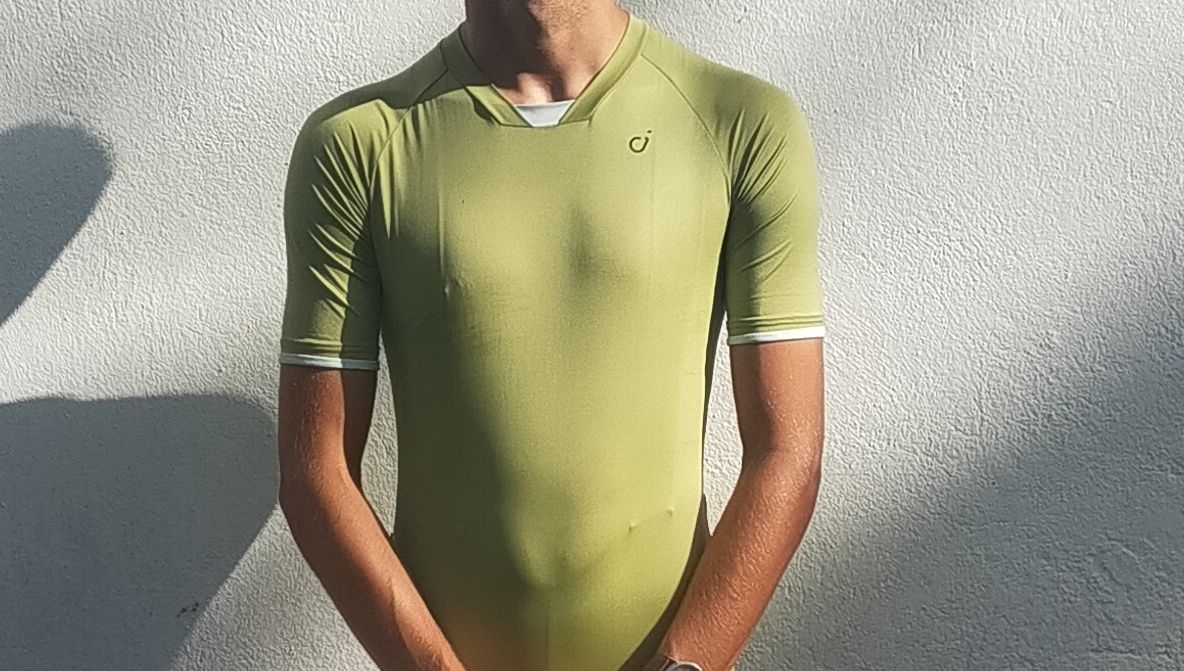 It’s expected what a cycling jersey looks like, and Velocio has thrown a major wrench in the works: the zipper is gone and the front looks more like a fitted sports shirt you typically see in theaters. sports and gymnasiums.

When I first unboxed the jersey without the signature zipper, it took me a few moments to accept what was presented to me. The zipper of a jersey is not only an essential part of dressing for a ride, but unzipping it to allow some air to be blown against you is just right. what we do.

They say we don’t like the change, but after two months of testing, it turns out that I’m quite a fan of such a drastic redesign of the cycling jersey. Velocio won me over with their zipperless version of the modern jersey.

It’s been a battle to decide how to judge this jersey: do I rate it on its actual offering, or do I compare it to traditional jerseys? If I have to do the former, then a close five star is on the cards; if I have to go for the latter, it gets four simply because I don’t see how zipperless jerseys will ever take off, no matter how good the Velocio product is. Some traditions shouldn’t change, and I think I’m on that side.

Nonetheless, Velocio have produced an antidote to what has gone before and created a sleek, well-fitting jersey that works and looks as good as a jersey that sticks with what we all know.

In line with expectations, eco-friendly clothing is now becoming the standard-bearer for cycling clothing, and Velocio is on all counts, claiming that 85% of the fabric used is recycled. They break down the jersey material into 90% recycled polyester and 10% spandex, the latter being a key part of the jersey’s compression fit. Another thing to note is the lightness of the jersey.

The lack of a zipper means the jersey is uniform all the way down to the low collar, joined in the middle by a simple white cutout that really makes this jersey, at least from the front, look like a racer.

Down to the sleeves and the jersey is edged with a slightly thicker white stripe which does a great job of holding position; the jersey hem, meanwhile, stays the same color and has just the right amount of spandex to also stick exactly where it needs to.

to the back and the jersey looks just like a standard jersey, stuffing into three easy-access full-size pockets, including a good-sized zipped pocket for keys or whatever you’re very conscious of keep this bit safer.

Over the course of eight weeks, I tested the light olive colored jersey in the mountains of Catalonia, the relentless hills of northern Spain and mostly the full length and breadth of Portugal. It responded to every test I put it through – except in one scenario I’ll come back to.

Such spots mean that I’ve worn this jersey in a varied range of temperatures, pairing it with arm warmers on colder rides that didn’t impact its fit or performance, and that it felt breathable when the mercury was above 30 degrees.

The fit is slim and race-like, and it fits my body shape better than most jerseys in the past. Her compression was so good that I have no doubt she would impressively show off all the pectoral muscles I could theoretically one day have, a prospect which, to my disappointment, is very unlikely to happen. Such quality of fit speaks to the stretchability of this jersey.

When ridden in the sun, the light olive jersey gives off a golden hue to match the color of my arms – again wishful thinking – which adds to the premium look, while the small logo on the top left keeps the whole design clean and simple, resisting the need to overcomplicate things.

What caused a bit of a complication, however, was pulling off the jersey with stuff still stuffed in the pockets. It’s a minor complaint, and one that can very easily be resolved by emptying the pockets before undressing, but pulling a singlet loaded with keys, wallets, and a vest over your head just got a little harder to do.

The initial hesitation to wear the jersey without a zipper was born out of fear of other riders assuming I was not up to cycling standards, but that was overcome very quickly once I realized the jersey itself- even is up there with the best I’ve ever worn.

Velocio, an American brand created only in 2014, claims that the idea behind the elimination of the zipper is that a cape with wide flaps is not necessary in everyday life. And they’re absolutely right: we hardly ever lower a zipper until the ride is over.

But when we want a bit more air, when climbing a mountain or battling intense summer heat, the option of zipping up a jersey is as welcome as dipping our head into cooler water to cool off. It is, some would say, a saviour. That’s why this jersey may be left at home on hot summer days and saved for cooler summer rides and the shoulder season.

On more than one occasion I found myself frustrated at being deprived of the zipper option, although this has to be tempered by saying that even on such occasions the jersey never felt stuck to me, constantly and systematically wicking away perspiration and maintaining its breathability.

It is ultimately this that is at the origin of my dilemma in the way of presenting this journal: comparing it to tradition or judging it solely on what it is. Even doing the former, and the ensuing annoyance, that jersey still didn’t detract from performance, nor did I feel significantly deprived without the air hitting my open torso.

Will this zipperless style take off? Does Velocio even intend to rewrite the rules? The answer to the first question is an almost certain no, and the second answer is definitely a shrug; that’s probably not their intention, it’s just another line in their ever-expanding and much-loved collection.

Jerseys without zippers will remain an outlier, of which I am convinced. But I’ve also been persuaded that they don’t mean reduced quality, and perhaps more importantly, they don’t mean a poorer look at the number of stylists. As one biker told me: “Despite its atypical look, it suits you so well.”

Would I buy one myself? Provided I could make some money, knowing now how they should ride and what I look like wearing one, yes I would. And that’s the biggest compliment I can pay to a jersey that I was originally – and understandably – so skeptical about.